admin Posted on May 8, 2021 Posted in genealogy No Comments

Maurice André was the second child of Jean Jacques André and Maurisaz Clerc. Born at noon on August 30, 1782, in Thônes, Savoie, he was baptized the same day by Cure Delachenal with Maurice Dupont and Marie Rey as his godparents.

An old postcard shows Thônes, Haute-Savoie,
which lies in the Alpine region of France, between Geneva and Albertville. 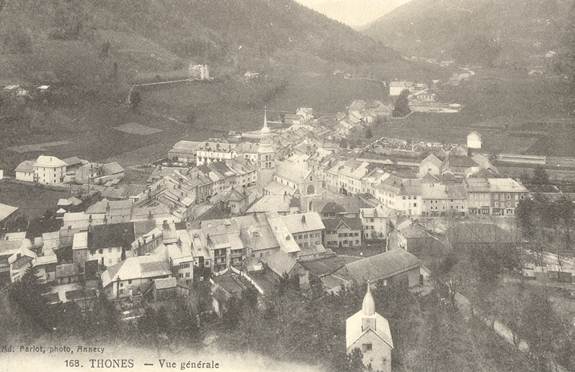 Nothing is known regarding when or why Maurice left Savoie or how he came to be part of an imperial household. He was often said to have been an "aide" to Marshall Duroc, Napoleon's Grand Marshall of the Palace. There are no records to show that Maurice served in any military capacity, however according to the records of his marriage to Caroline Sophie Charpentier, his occupation was "valet de pied" to Her Imperial Highness Princess Pauline, Napoleon's favorite sister. His residence was given as Pauline's home, the Chateau de Neuilly. Prior to that, he had lived at her home in Paris, Hotel de Charost, at Faubourg St. Honore no. 39. His wife, Sophie, was also a part of the household of Princess Pauline. Maurice and Sophie were married in 1809 while in attendance at the Court. They were still living and working in the chateau when Caroline Sophie's brother, Louis Augustine Prince Charpentier, married in 1811. Maurice's occupation at that time was given as "porter.” Maurice declared that he was unable to sign his name on either of these marriage records, however Sophie signed her name to both.

The couple's first child, Pauline, was born in 1814 at the home of Maurice's father, Jean Jacques André, in Thônes. According to the birth records for Pauline, Sophie had been living there only six weeks when she gave birth. Maurice was absent when his first child arrived as he was in Naples, serving as chief valet to Princess Pauline, who was there visiting her sister, Caroline. Their brother, Napoleon, had just left for Elba. This infant Pauline lived less than a year. Another daughter born in 1819 was also given the name Pauline. It was a common practice in those days to name a child after an older sibling who had died.

Many people left Thônes in the mid-1840's because of the terrible conditions, including the famine that ravaged the area. Maurice and his son, Louis, were the first of the Andrés to come to America. They remained briefly in Louisiana on a plantation owned by Billon Delhommer until other members of the family joined them. In the Delhommer family history there is an Elizabeth Duclos de Celle. Her marriage took place near Fort Chartres in Illinois. These Duclos were related to those in Ste. Genevieve where there is also a connection to the Boyer family. Many of the ancestors of the Delhommers came from the Normandy region of France, the area where Sophie Charpentier's family lived and worked. Is there a connection between the Delhommers and the Andres?

Moving up the river the family put down roots in Ste. Genevieve, Missouri. At that time Sainte Genevieve was at the height of its prosperity. It would not be many years until St. Louis would overtake it, and Sainte Genevieve would become a small, quiet village. On April 5, 1851, Maurice and Caroline purchased a plot of land with a house and other buildings on the corner of Fourth and Jefferson Streets. They paid $600.00 to Eugene and Theresa Guibourd for their new home, which still stands and is now known as the Simon Hubardeau House. In 1852 Maurice and Caroline Sophie sold the house to their son, Louis, with the stipulation that they could live out their lives there. Louis was forced to sell the house to Louis Menard in 1858 for taxes of $155.00. 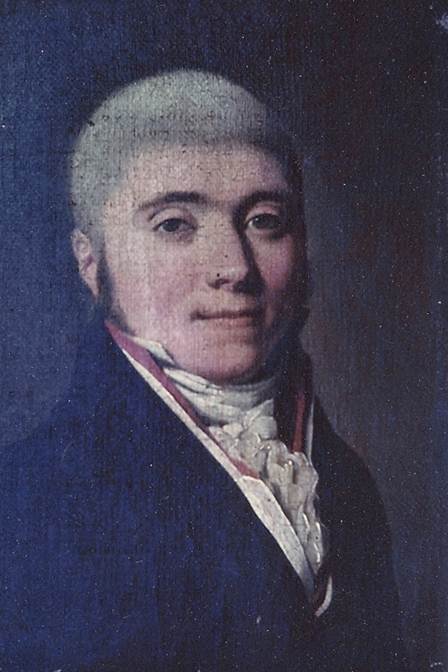 Thanks to Anne André Clark we have photographic copies of an oil painting done of Maurice.

"The year one thousand seven hundred eighty nine the twenty first of May, feast of the Ascension of Our Lord, was baptized at the font of this church, by me the undersigned priest, Caroline Sophie, born yesterday, of the legitimate marriage of Louis Charpentier, gardener at the Chateau of Montgobert, and of Marie Elisabeth Guillard. The godfather was Francois Charpentier, also gardener Rouen parish of Pisseleux, her uncle, the godmother Marie Louise Guillard, wife of Louis Potentier of the parish of Coeuvres who have signed with me this registry."

Caroline Sophie was born on May 20, 1789, at Montgobert, Aisne, which lies north of Paris, in Picardy. Although there are no records of Sophie being a lady-in-waiting, she did live in the household of Princess Pauline. This is understandable for her family, the Charpentiers and the Guillards, had worked in the châteaux and abbeys in the area of Aisne for generations. Many were gardeners; some were household staff. The Chateau de Mongobert was built in 1756 by Desplasses, a solicitor to the king; it later belonged to Pauline Bonaparte.

On June 14, 1797, Pauline Bonaparte (1780-1825) was married to General Victor Emmanuel LeClerc in Milan. Returning to Paris in 1798 Leclerc purchased a home for Pauline on the rue de la Victoire. In addition they had the Chateau de Montgobert, in Aisne. After the death of General LeClerc Pauline purchased the Hotel de Charost on the rue de Faubourg St. Honore. (This building became the British Embassy after Napoleon's defeat at Waterloo.)

When Pauline settled in Paris, she had many of the furnishings and even plantings moved from Montgobert. It seems logical that her staff might have accompanied her also. Sophie’s brother, Louis, was part of the Princess’s household in Neuilly when he married in 1811. The wedding record shows that he was serving as “valet de chamber.”

Pauline enjoyed the summer of 1805 "in the country" at the Petit Trianon, and in 1806 went to Turin. Her court was known to have the loveliest ladies and the handsomest men. The colors Pauline chose for herself and the ladies of her household were lilac and silver. Pauline was often seen going from the Hotel de Charost to the Tuileries, with two footmen in green livery carrying her in a sedan chair.

Pauline's sister, Caroline, was married to Joachim Murat, the Governor of Paris. In 1804 Murat had purchased the Chateau de Neuilly. When Murat was made King of Naples Napoleon gave the chateau to Pauline.

"We were all," said the Duchess of Abrants, "at that time radiant with a sort of glory which women seek as eagerly as men do theirs, that of elegance and beauty. Among the young women composing the court of the Empress and that of the Princesses it would have been hard to find a single ill-favored woman, and there were very many whose beauty made, with no exaggeration, the greatest ornament of the festivities held every day in that fairy-like time."

In the memoirs Madame de Remusat it says, "Public opinion stigmatized the Princess Borghese; her conduct cast an unfortunate reflection upon the young and pretty women who formed her court."

Many years later in Ste. Genevieve, Captain Gustavus St. Gem told Annie Clark that Caroline "had the most beautiful legs and hands and figure of any woman he ever saw and that she was charming and clever." Considering that she was about 57 years old when she came to America from France, she must have really been something!

Caroline is listed in the 1860 Ste. Gen. census as "Sophie", aged 72. She was part of the household headed by her son, Louis.

Sophie; her two daughters Jeanne, and the widowed Pauline Dufour; and three of Jean Jacques Louis' children appear in the passenger list of the ship, James N. Cooper, which arrived in New Orleans from Le Havre on Christmas Eve, 1846. The children were Maurice, Damien, and Philip. Regardless of some discrepancies in names and ages these do seem to be the correct records.

When the André family came to American from France they brought with them several items of jewelry. According to letters from the daughter of Dr. Maurice André, Anne Clark, to her cousin, Joseph Leon Vorst, Sophie carried them with her in a sack. Among these were: a necklace with blue sapphire stones surrounded by silver, a blue lapis locket, a locket with a picture of Sophie, and a blue enamel watch surrounded with pearls. It is unknown what became of these items. It is possible that the family sold these pieces when they fell on hard times. There was, also, a gold watch and chain presented to Maurice by Marshall Duroc, to which Princess Pauline added a heavy gold seal watch charm. This watch, at one time in the possession of Dr. Victor André, the son of Dr. Maurice André, is now owned by Patricia Childers. Patricia is the only grandchild of Anne André Wilder Johnson Clark. There were other pieces of jewelry and articles of clothing, which had belonged to the princess, in the possession of Louise André Dupont. Louise André Vorst had a few pieces of clothing that had been Sophie's. Anne Clark had in her possession a dress and an oil portrait of Maurice. During the forties she had photographic copies made of the picture for the family. 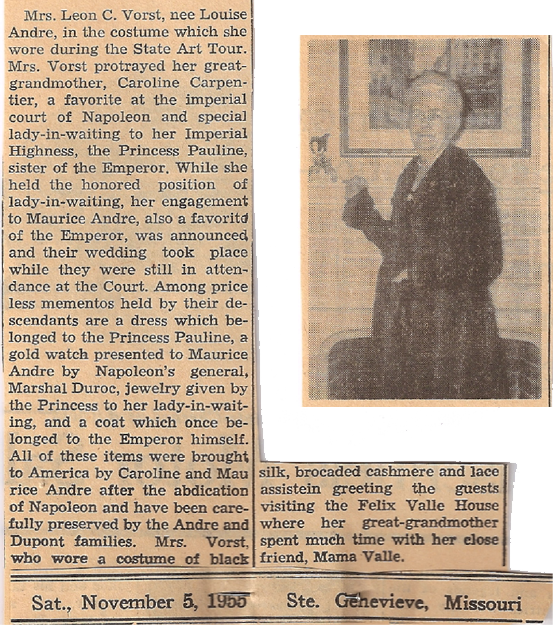 Mrs. Leon C. Vorst in the costume which she wore during the State Art Tour. 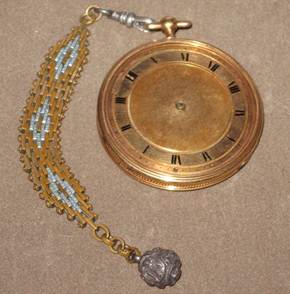 Marshall Duroc’s watch no longer marks the time for at some point it lost its hands. 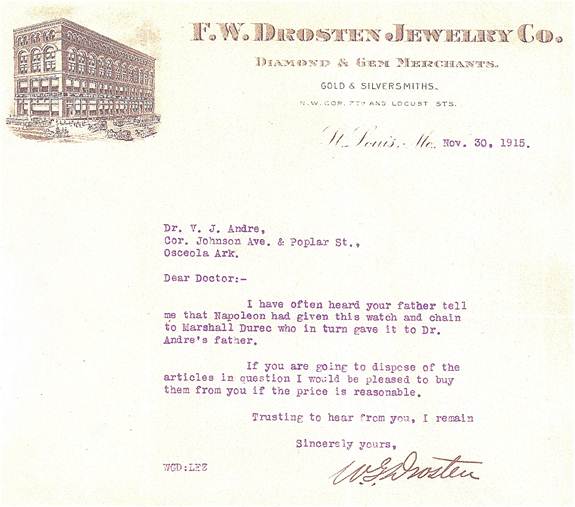