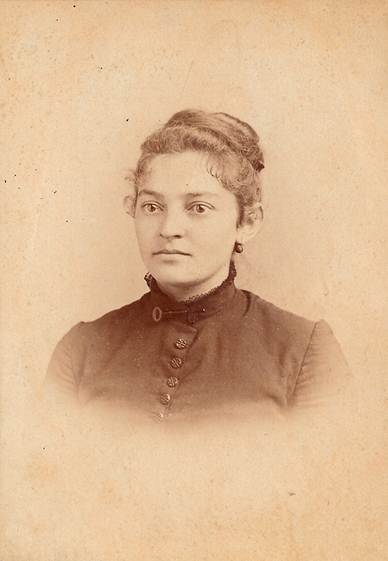 The census for 1920 shows that Josephine Ziegler owned her home on North Forth Street. Living with her were Harry Huckins, her son-in-law; her daughter Charlotte Blanche Huckins; and a step-grandson, Herman Huckins, aged twelve, born in Kansas.

In 1930 the census says that Josephine’s granddaughter, Lois Ziegler, was living with her.

Looking Back, 75 Years Ago - 1929
Theodore A. Meyer recently bought the George E. Beckerman place from Mrs. Josephine A. Ziegler.

Flat River, St. Francois County, Missouri
Friday, May 12, 1950
Mrs. Leona A. Bradley, wife of the late Joe L. Bradley, passed away at her home on Route 2, Farmington, at 9:10 p.m. on Tuesday, May 9, 1950, ending a prolonged illness. She was 62 years of age.
Leona A. Ziegler, daughter of the late Henry C. and Josephine Vorst Ziegler, was born in Ste. Genevieve County, Mo., on December 3, 1887. She was united in marriage to Joe Bradley, who passed away a year ago. A son, John Henry Bradley of Route 2 survives, with two grandchildren. A daughter preceded her in death in infancy. She also leaves a devoted daughter-in-law, Mrs. John Henry (Alberta Pinkston) Bradley, granddaughter-in-law, Millie Marie (Mrs. Paul) Bradley; a brother, Louis Ziegler of Ste. Genevieve and a sister, Mrs. Charlotte Huckins of St. Louis, besides other relatives and friends.
The body lies in state at the residence and funeral services will be held at 2:00 p.m. on Friday, May 12, at the Fairview Baptist Church, conducted by her pastor, the Rev. E. E. Blaylock, assisted by Rev. J. W. McKinney. Interment will be in Parkview Cemetery, with C. Z. Boyer Son Service.

Charlotte Blanche Huckins tells about Louis, as a child, cutting the heads off of all of his younger sister's dolls. From what everyone says he must not have been a very likable man. He served as sheriff for Ste. Genevieve County. I only remember him when he was much older. He still lived on the old Ziegler farm where he had horses and ponies. My mom loved horses so we would go there to ride. Sometimes on a summer evening Louis would bring horses out to The South Forty for us to ride. We would all sit under the big walnut tree in the front yard and visit and we would take turns riding up and down the dirt road. Mom really loved that. Apparently he liked my mother and my grandmother and was always friendly with them.

On March 31, 1893, Josephine Vorst Ziegler gave birth to her third child, Charlotte, at their home on Fourth Street, in Ste. Genevieve. In that house was what was called a "white room", which was a room kept for giving birth. Many of the family babies came into the world in that room.

Charlotte's father, Henry Clay Ziegler, was a wealthy farmer who owned large tracts of land in the Big Field. Even his workers, descendants of some of the old slave families, became prosperous under him. Levi Ribeau did so well that he was able to buy his own land.

Charlotte's grandparents were the owners of the Old Southern Hotel. As a child, one of her chores was to go up into the hotel cupola to watch for the riverboats.

Charlotte married a railroad man, Harry Huckins. They lived in St. Louis, on Marquette near the railroad yards. Later Charlotte took in boarders. Many of the men in the family at some time stayed at Charlotte's. Joseph P. Vorst, the artist, came straight from Germany to Charlotte's. Joseph L. Vorst, the lawyer and French teacher, lived there while he attended St. Louis University Law School. Clarence Karl, who later married Alice Vorst, lived there when he was working on the river. Isabel Vorst's son, Charles Hopkins, worked on the river and lived at Charlotte's. And, there was Marie Moore's husband, Fred Wood, who worked on the river and who would sometimes go out for cigarettes and not return for days.

The weekends were very different. All the men would return home to their families. Charlotte's daughter, Charlotte Blanche, would come home from the boarding school where she was sent "to keep her safe from the boarders". Myrtle Vorst would come up from Ste. Genevieve to visit her fiancé, Fred Albert Sheppard, who was in law school at Washington University. Alice Vorst would stay over night when she came up to the city for her violin lessons.

Some years later Charlotte Blanche would marry one of the boarders, Marion Moebes.

Charlotte Huckins died on June 17, 1968, and was buried in Valle Spring Cemetery in Ste. Genevieve, Missouri.