admin Posted on May 8, 2021 Posted in genealogy No Comments
Records show that Maurice was enrolled at St. Mary’s of the Barrens Seminary in Perryville, Missouri, in March of 1849, at the age of 14. He was naturalized on 11/29/1855 in Ste. Genevieve. Maurice graduated from Washington University Medical School in St. Louis, MO, in 1866. He practiced medicine in Ste. Genevieve until about two years before his death, when he moved to St. Louis. He died there in a hospital at the age of 79. He served as president of the Ste. Genevieve Medical Society, and was a "Forty-Niner" (?). He was a member of the Ste. Genevieve Camp Modern Woodmen of America. His office was on the southwest corner of Main and Merchant Streets.

In 1863 Maurice had a liaison with a slave named Jane. From this relationship there was a son, Charles Edward André, born on December 8, 1863. After the age of seven Charles Edward lived with the André family serving as a houseboy. In return he was tutored in music and literature. When he was thirteen he left the family and went to work as a musician playing on riverboats on the Mississippi.

Dr. André delivered Anna and Vi Vorst, the daughters of Joseph and Jennie Vorst. According to Anna Thomure, it was because their mother believed that Dr. André was "the best at bringing babies into the world."

Ste. Genevieve, Mo. Saturday, May 31, 1952
Looking Back 50 Years - 1902
"Dr. M. ANDRÉ received this week from his son, Victor, who is a U. S. Veterinary Surgeon in the Philippine Islands, a collection of curiasities (sic), consisting of articles of warfare and trophies used by the Filipinos. The doctor will be pleased to have his friends call at his office and see them."

Found online at modernwoodman.org:
"Modern Woodmen was founded in 1883 by Joseph Cullen Root in Lyons, Iowa. He dreamed of a fraternal benefit society, one designed to provide financial security to families from all walks of life. Root envisioned a self-governing society whose members came from local camps (lodges) across America. The lodge system, which remains in effect today, nurtures community spirit by bringing families together for wholesome, social, recreational and service activities."

On April 13, 1903 Maurice applied for a passport in order to go abroad. This document gives us a good physical description of him - the only one we have for any of the earlier generations of the family. The application also confirms his immigration and naturalization information.

Census 1910
Maurice, retired doctor, and Clementine were boarders at the Meyer Hotel on Main Street run by the Baumstarks. Also boarding there was their former son-in-law, Andrew Wilder, with his second wife, Martha, and her daughter, Rosemary, from her first marriage to the son of Rosemary Hauck and Louis Naumann.


Clementine was one of the three daughters of Dr. Francis Bernays and Amelia Adleman. The family came to America in 1854, settling in Illinois. In 1865, they moved to Ste. Genevieve, Missouri, where they made their home in the Louis Ratte LaBruyere House on Main Street. Clementine was in CT with her daughter, Anne, when she died in 1927. 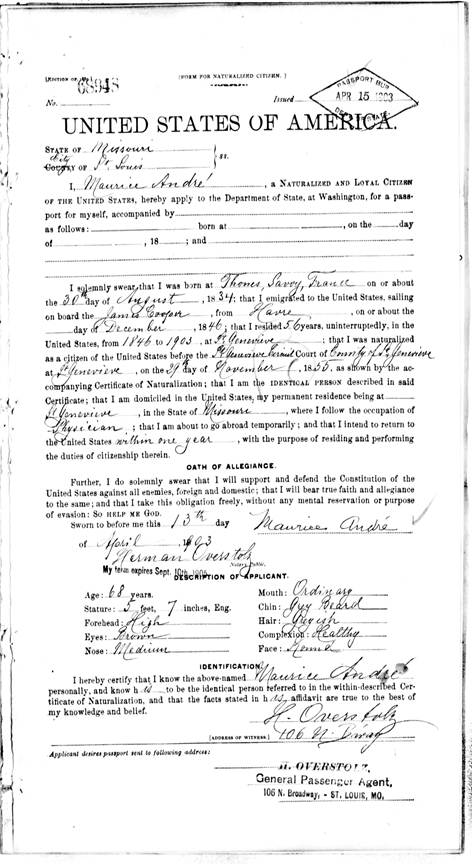