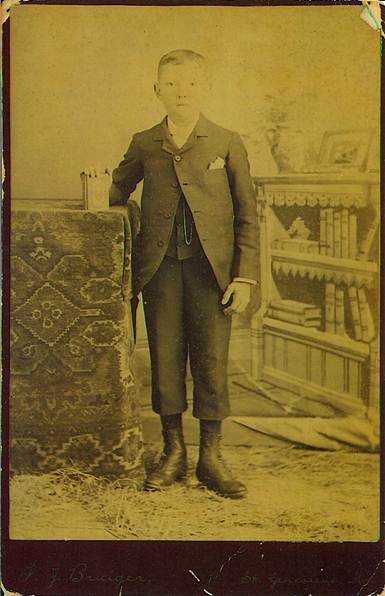 Léon and his brother, Joseph, operated the Vorst Brothers Livery Stable Company. Leon later started a service car business and owned the second automobile in Ste. Genevieve. (Dr. Lanning is said to have owned the first.) Léon also had one of the first automotive filling stations where he served as the agent for the Pierce Oil Corporation. It was located at the corner of Fourth and Market Streets. Lalla still owned the property when she died; her heirs sold it shortly thereafter. 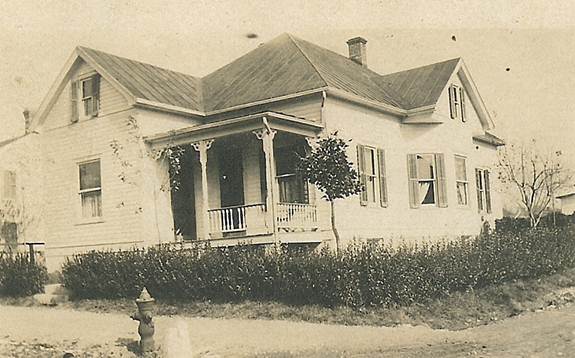 Léon and Lalla had the house at 198 South Third Street built in 1909. Thought to be a Sears Roebuck packet house, it was shipped up the river from New Orleans. The beams visible in the basement are cypress. It was the first house built in Ste. Genevieve with electricity, central heating and indoor plumbing. It stands next door to the Southern Hotel, which the Vorst family owned and operated.

On Léon’s WWI draft registration, dated 1918, he declared himself to be short and stout with blue eyes and brown hair.

At the time of his death Léon had just been reelected alderman of the second ward of the City of Sainte Genevieve. On September 25, 1929 a special election was held to fill the unexpired term. Before his funeral, Léon was laid out in the small room at the front of the home that was built to be used for that purpose. Afterwards, Lalla said she would never have anyone laid out in her house again. She remodeled the house, eliminating that room by removing the wall and enlarging the living room.

Large pecan trees grew in the back yard and along South Gabouri Street, stood a three-car garage. These spots were rented out. Sometime after September of 1965 the garage was torn down.

Obituary from the September 14, 1929 issue of the Fair Play newspaper:

A RESPECTED CITIZEN
IS CALLED TO REST
Leon C. Vorst -- Succumbs
Friday Morning After
Lengthy Illness
- - - - - - - - - - - - - - and - - - - - - - - - - - - citizen of Ste. Genevieve, Leon C. Vorst, was called to his Heavenly reward at his home in this city at three o'clock Friday morning September 6, 1929 after an illness of over a year's standing caused by a complication of diseases. Over this period of illness the deceased man bore the tribulations of a pain-wracked body with a determination to "carry on" with such remarkable courage that he gained the admiration of his many friends in this community who, though wishing to help, were powerless to stem the ravages of ill health that was slowly wearing away the cheerful, friendly spirit that dwelt within the body of this fellow townsman.

The life of this man was modeled along the lines of a true Christian gentleman, who not only benefited the community in which he lived by his untiring zeal, but sought each day to brighten by kind words and deeds the drab, every-day existence of those less fortunate than he.

Finishing his schooling in Ste. Genevieve, Mr. Vorst entered the livery stable business with his brother Joseph and the partnership was carried on for years until the coming of the automobile necessitated a change. Realizing the future of this mode of conveyance, he entered the service car business independently. On November 29, 1906 he was united in marriage to Miss Louise ANDRÉ, a daughter of the late Mr. and Mrs. Damien ANDRÉ of Ste. Genevieve and to this union three children were born. His wife and children, Myrtle, Alice and Joseph Vorst survive. Two sisters, Mrs. James Moore and Mrs. Josephine Ziegler of Ste. Genevieve are also living. Besides his other interests Mr. Vorst was Ste. Genevieve County agent for the Pierce Petroleum Corporation and in this capacity he served faithfully for years and through his energy and salesmanship built up a prosperous business in this territory.

In public life, the popularity of the deceased man was attested to by the fact that he served in the city government as Alderman of the Second Ward for over twelve years. He was also a charter member of Council 1037 Knights of Columbus of Ste. Genevieve and a member of the M. W. A. Lodge.

The funeral services were held Sunday morning at eleven o'clock from the home to the Ste. Genevieve Catholic Church and after a Mass and Requiem services conducted by the Reverend C. L. van Tourenhout, the remains were taken to the Valle Spring Cemetery for burial.

The Fair Play offers its sincere sympathy to the bereaved family in the hour of sorrow caused by the loss of so beloved a member of the family.

Saturday, June 23, 1883
SCHOOLDAYS
Little Leo VORST and Bennie ROZIER had quite a surprise party last Sunday. The donkey, which is a recent acquisition at the Southern and usually a very gentle animal, has been their favorite saddle horse ever since his arrival and many a time have they enjoyed the pleasure of equestrian exercise on his patient back. Last Sunday, when they took their usual airing on donkey-back, Little Gray got it into his head that they were very small boys indeed and he might as well have a little fun of his own. The consequence was that "his head went down and his heels flew up," and our two little heroes found themselves undonkeyed, so to speak, and sprawling on the ground. Outside of a few scratches, they sustained no injury.

12/18/2002
100 Years Ago - 1902
The Vorst brothers, livery men, intend to soon fit up their livery barn with a complete outfit of new rubber-tire rigs of all kinds. They are a progressive bunch.

1/5/2005
100 Years Ago - 1905
Joseph Vogt this week bought a team of horses from Vorst Brothers and his son, Harry, is driving them. Joe now has two teams hauling freight.

September 1917
Leo Vorst is the champion pumpkin raiser, Leo has pumpkins to eat the year round. He even now has pumpkins from last year's crop in his cellar and they are just as sound as the day he cut them from the vines. It is all in knowing how to keep them. (Only a small space under the house was excavated, that was where the coal furnace was located and where the laundry was done. On one side there were shelves filled with beautiful jars of home-canned goods. A larger area was hardly more than a dirt crawl space. Perhaps that was where the pumpkins were stored. L.V.S.W.)

Lucille Basler in "The District of Ste. Genevieve" telling about Fourth Street says, "As we continue across the tracks, we have to remember a much later date, when Louis Nauman owned the property and leased it to the Ste. Genevieve Brass Band for a Music Hall and ever after, this crossing was known as 'Band Hall Crossing,' ask any railroad man."

Old newspaper clippings tell us that the members of the Force Band gave a Grand Ball on Easter Monday at the Union Hall. (Easter Monday would have been 4/6/1896.) And that in May 1900, "The Ste. Genevieve Brass Band boys have sent out orders for new uniforms, and intend to shine on the Fourth." 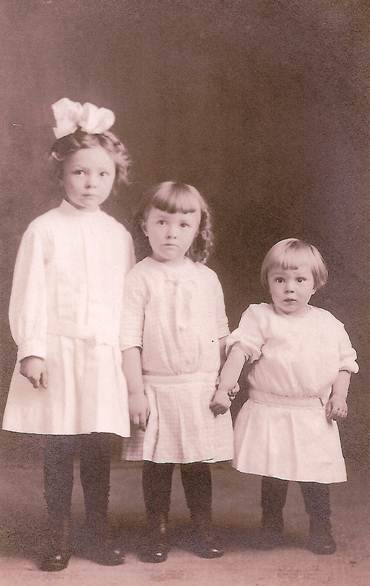