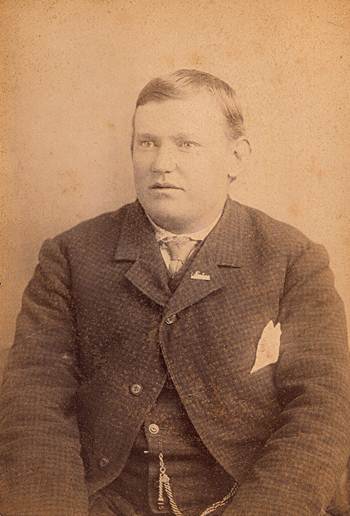 Joe Vorst ran the livery stable and hired out teams of horses and drivers, some of whom excavated for the foundations of buildings going up in the Sainte Genevieve area. He also had a contract to supply teams to assist in the erection of buildings in St. Louis that were being put up for the 1904 World's Fair.

Ste. Genevieve, Missouri,
Saturday, Dec. 29, 1883
The festival held at Union Hall last week for the benefit of the Catholic
Church was a success, financially and otherwise. The gross receipts
amounted, as we learn, to $750. Of those who won the most valuable prizes, we mention: Valeri GISI - a silk quilt; Mary RINGWALD - a sack of flour and a suit of clothes; Octave BOYER - a sewing machine; Jacob YEALEY - a dressing gown; Joseph VORST, Jr. - a doll; Ferdinand BOYER - a tea set.

Saturday, February 2, 1884
Jos. VORST, Jr., was agreeably surprised this week, when he arrived at DeLassus, to find a cousin of his who has just arrived from Essen, Germany. The gentleman, Mr. Jos. LANGHARDT, was engaged in teaching in the "Old Country," but was obliged to give up his position because his hearing failed him, and now intends to purchase a suitable place in the neighborhood to engage in farming.

Saturday, Jan. 3, 1885.
Mr. Joseph Vorst, Jr., and Mr. H. Clay Ziegler went to Farmington
Monday morning, to get a load of beer for the Southern Hotel Saloon. They returned Tuesday and report that the roads are in a very bad condition.

Jan. 1, 2003
100 Years Ago - 1903
Joe Vorst had a number of men and teams busy this week excavating the cellar under Boverie's new store. As the building will be 40 feet front by 80 feet depth, the cellar has to be extended eastward accordingly. it will be nine feet deep. The new store will be fitted with an elevator and electric lighting. 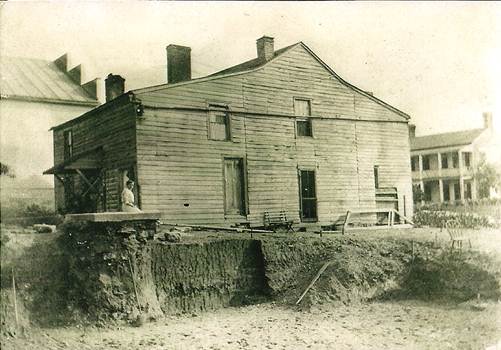 The photo above shows the first home of Joseph Henry and Jennie Vorst viewed from South Gabouri Street. To the rear on the left is the stable and on the right is the Southern Hotel. The excavation is for their new home, shown as it is now viewed from the front on South Third Street. The house, built in 1914, is occupied by a great granddaughter of Joseph and Jennie. 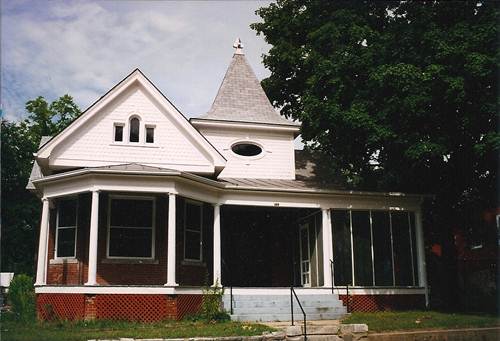 Age 96, Dies Here
Mrs. Jennie Ruth Vorst, one of Ste. Genevieve's oldest citizens, passed away at her home here at 6:30 p.m., December 10, 1964, at the age of 96 years, 10 months and 8 days.
Jennie Ruth Biel was born at Coffman, Mo., February 2, 1868, a daughter of the late Charles and Martha Faulkner Biel. On September 18, 1889, she and Joseph Vorst of Ste. Genevieve were married here by Father F. X. Weiss. Her husband has preceded her in death.
Surviving are two children, Viola (Mrs. Fred Oberle) and Anna (Mrs. Raymond Thomure) of Ste. Genevieve, a foster daughter, Mrs. Alma Haberstock of St. Louis County, two grandchildren, two great grandchildren and three great, great grandchildren. The remains were taken to the Basler Funeral Home and requiem services were held December 13th, at 2:30 p.m., at the Presbyterian Church here, Rev. L. E. Evans officiating. Burial took place in Crestlawn Cemetery.
Mrs. Vorst was a charter member of the Presbyterian Church in Ste. Genevieve.
Sympathy is extended to the bereaved family in the loss of a beloved mother and grandmother.

Jennie’s father Charles Biel was a merchant in Ste. Genevieve. Jennie was one of his three daughters - all by his first wife. He married twice more. During the Civil War he served in the Confederate Army. His brother, William, was in the Union army. Charles and his family were instrumental in forming the Presbyterian Church in Ste. Genevieve.