Damien André was the third son of Jean Jacques Louis André and Marie Francois Revillod. Born in Thônes, on April 1, 1837, he was baptized the following day in their parish church, Eglise de St. Maurice. Jacques André, a cousin, and Jacques' wife, Christine Dupont, were Damien's godparents.
Damien was the grandson of Maurice André and Caroline Sophie Charpentier, who along with most of their family left France for America in 1846. He arrived in New Orleans on Christmas Eve on the ship James N. Cooper. From there they traveled up the Mississippi River to Sainte Genevieve, Missouri.

On December 28, 1858 Damien paid his father, Louis, $200.00 for goods that included a black and white cow about twelve years old, a cow without horns about six years old, a heifer about two years old, a calf about seven months old, a cart and wheels, two cart bodies, a toilet bureau, a wardrobe, four bedsteads, a large cooking stove with utensils, a parlor stove, two sets of wagon harness, a set of cart harness, a ladies riding saddle, a turning lathe with all the tools, two clocks and a large cross-cut saw.

Damien became a naturalized citizen of the United States, on November 8, 1859, renouncing all allegiance to France. Charles C. Rozier, Clerk of the Circuit Court in Ste. Genevieve, administered the oath.

The 1860 census listed Damien's occupation as "farmer". Tax records for 1861 show that he owned no real estate at that time but did have other personal property valued at $20.00 for which he was taxed $10.00. Ten years later the 1870 census gave his occupation as "teamster".

Damien's first wife was Mary Frances Frechet, the daughter of John Frechet and Mary Zelina Winston. They were married on November 22, 1864, at her father's house. Evarist Dupont and Francis Bidant were the witnesses. Mary Frances died less than a year later.

Damien died at 9:40 pm on March 25, 1880. The cause of death was given as consumption. Not quite forty-four years old he died intestate, leaving his wife and the two young girls. John L. Bogy, Judge of the Probate Court, appointed Louis Naumann administrator of Damien’s estate. Several plots of land were sold by Julia and the estate, including some along Market Street between Fourth and Fifth Streets in what is known as Block #25.

July 2, 1874
Mr. Damien André is suffering from bone felon, may have to amputate.
(A bone felon is an inflammatory sore on the finger near the nail. LVSW)

An old receipt notes that clothing for Damien’s burial
was purchased from C. W. Hamm by F. Dupont.
(either Damien’s brother-in-law, Frank, or Frank’s son) 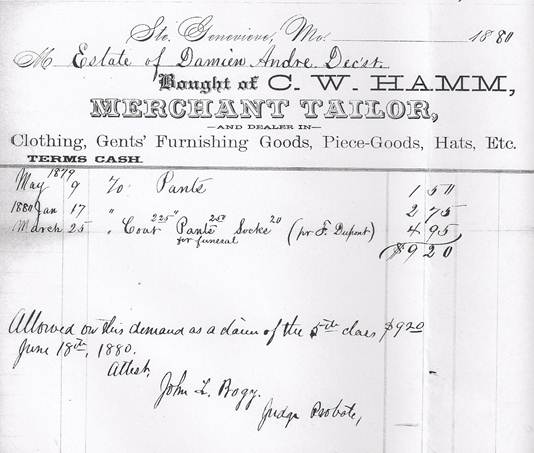 Damien was first buried in the old Memorial Cemetery but later his daughter, Louise Vorst, had his body moved. He now lies beside his second wife, Julia, in the Léon C. Vorst plot in the Sainte Genevieve Catholic Cemetery at Valle Spring. Also buried there is their daughter, Louise Vorst and her husband Léon, their three children and several other members of the family.

Julia was one of the many daughters of Nicholas Hauck and Barbara Keck.
Her older sister, Rosina, was married to Louis Naumann. 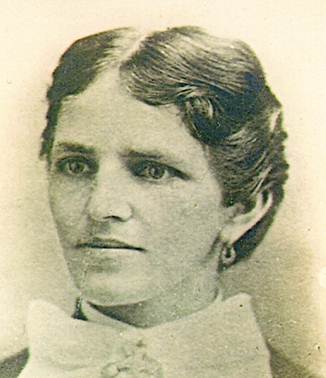 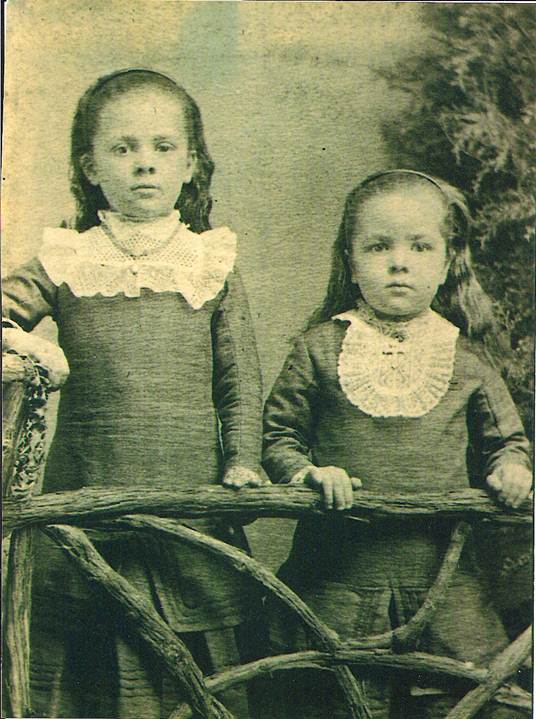