In August of 1998, during her stay at Riverview Manor Nursing Home, Anna Thomure said that she and her sister, Vi, were both delivered by Dr. Maurice André because their mother always said, "Dr. André was the best at bringing babies into the world."

Wed., June 7, 2000:
Anna G. Thomure, of Ste. Genevieve, died Thursday, June 1, 2000 at Riverview Manor Nursing Home. She was 105 years, 6 months and 29 days of age.
Funeral services were held at First Presbyterian Church on Monday, June 5, 11 a.m. Burial was in Valle Spring Cemetery. Stanton-Wood Mortuary handled the arrangements.
She was born Nov. 3, 1894, in Ste. Genevieve, a daughter of the late Joseph H. and Jennie (Biel) Vorst.
She was married April 4, 1916 to Raymond J. Thomure who preceded her in death Feb. 6, 1961. To this union was born one son, Marion R. Thomure who preceded her in death March 8, 1971. She was also preceded in death by her sister and brother-in-law, Viola and Fred Oberle, and her niece, Anna R. Henson.
She is survived by one great nephew, Larry L. Henson and one great niece, Patricia Parker, three great-great nephews and eight great-great-great nieces and nephews, several cousins and also nieces and nephews by marriage who have faithfully kept in touch with her for many years.
She was the last surviving member of the first four year high school at Ste. Genevieve Public School. She was a member of the First Presbyterian Church.
Family requests memorials to First Presbyterian Church or memorial of your choice. 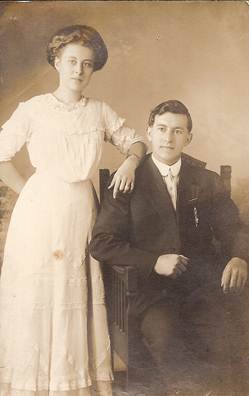 Vi and Fred Oberle on their wedding day. 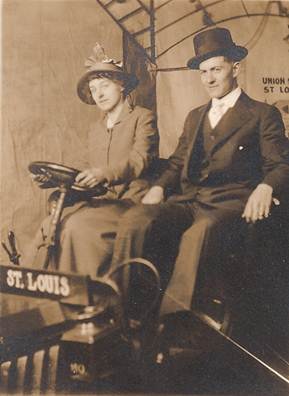 Anna Vorst and Raymond Thomure on their honeymoon in St. Louis.